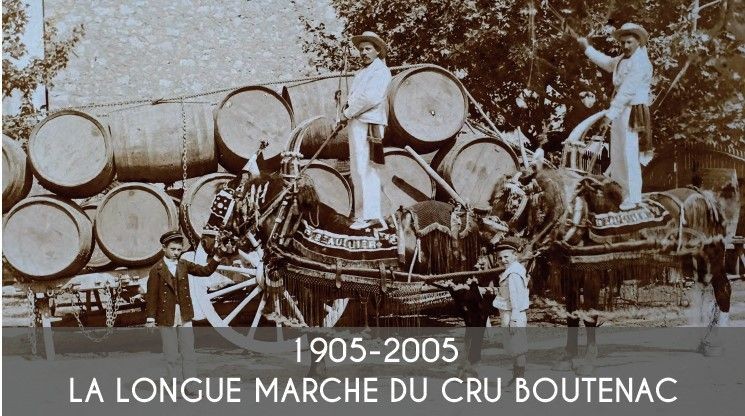 From the 1905 law against fraud, which introduced the demarcation of areas for a designation of origin, to recognition of AOC Corbières-Boutenac in 2005, a century would pass. However, as early as 1908, this part of the lower Corbières had already been identified.

Many have forgotten that by defining the boundaries of the Corbières, Blanquette de Limoux and Minervois appellations in 1908, the Aude department was one of the country’s pioneers. Against the backdrop of the great wine crisis of the early 20th century that followed vineyard replanting after the phylloxera disaster, the creation of the first Corbières producers’ organisation and initial demarcation of the appellation in 1908 are considered minor events. However, parliamentarians would vote in favour of the law of 1 August 1905 precisely to combat that same crisis.

The purpose of the law was to crack down on fraud and one way to achieve this was to define production regions for appellations of origin through administrative channels. It targeted four regions by name: Bordeaux, Champagne, Cognac and Armagnac.
But in September 1907, the Minister of Agriculture, Joseph Ruau, signed a decree giving local authorities the opportunity to request boundary demarcations for regional appellations within their area.
With southern France badly hit by the crisis and a series of mass demonstrations - including that of Narbonne in June 1907, violently put down by the army in bloodshed - this provision could seem trivial. However, on the following November 8, on the initiative of Eugène Mailhac representing Durban-Corbières, the Aude county council voted a vow to obtain the demarcation of Corbières along with Blanquette de Limoux and the Minervois, and addressed it to the Minister.
Landowners viewed the demarcation of the appellation area as a way of distancing themselves from the high-cropped wines of the plains and combatting businesses that had “disproportionately stretched the name of Corbières in a completely unlawful way”.
Eugène Mailhac was advised by Charles Tallavignes, a landowner in Saint-Jean-de-Barrou and Inspector General of Agriculture at the Ministry. He was in a good position to know about the decree signed by Joseph Ruau and acted as a power broker behind the scenes in Aude, drawing on the support of other enlightened landowners. One of them in particular, Gaston Bonnes, the owner of Château Gléon in Vilesèque, chaired the first Corbières wine producers’ organisation, created in Narbonne on 9 January 1908. In March 1908, forty village and town councils, including that of Boutenac, also sent the Minister an application for boundary demarcation signed by the winegrowers of each town and village in support of the wishes of the county council and producers’ organisation.
The sense of urgency was such that the people of Aude did not wait for the Minister's response. They created their own demarcation committees, including the Corbières committee, which met in April 1908 and set strict boundaries for the appellation, excluding the alluvial plains in the Lézignan area, the villages around Narbonne and Val de Dagne above Lagrasse.
Five areas were thereby clearly identified. Among them were the lower Corbières, encompassing vineyards located between Mont Saint-Victor, Camplong and Boutenac. This would become the original outline for AOC Corbières-Boutenac.

In the demarcation of Corbières approved by the Aude county council on August 27, 1909, the rolling schist soils stretching from Cascastel to Saint-Jean-de-Barrou were described as the appellation’s backbone.
Then came the surrounding Lias and Triassic soils and, farther north, the “psammites, sandstone and pudding stones” which form the “lower foothills of the mountain petering out into the plains of Orbieu and Aussou. The geological and topographical features at the foot of these lowest hills establish the border of the Corbières wine region”. In other words, the hills of Boutenac, aka the Pinada hill chain, mark the appellation’s northern boundary.
This initial demarcation of Corbières would never be officialised by Paris. Charles Tallavignes, who died from illness in March 1909, was no longer there to support it at the Ministry. More importantly, at the turn of the 20th century, the concept of appellation of origin had a long way to go before it would conquer the minds of people. And faced with violent disputes prompted by the demarcation of Champagne, the State even ended up abandoning the principle of administrative delimitations. In 1911, Catalan Jules Pams, the new Minister of Agriculture, prepared a draft bill designed to entrust the demarcations to... the courts..

It was only after the war, in 1919, that a bill inspired by his work would be adopted. For Corbières, the mayor of Lézignan and MP Léon Castel, was tasked with its implementation. A radical elected representative and founder of the first Aude co-operative winery in Lézignan in 1909, Castel was also a landowner and a negociant. He took matters in hand. He recreated the Corbières producers’ organisation in 1923 and quickly obtained a judicial demarcation by the courts of Narbonne and Carcassonne in August 1923.
The demarcated area was much broader than the selective delimitation of 1908, since it included the alluvial plains, which made trading easier and satisfied the co-operatives that flourished in the villages between the two World Wars. One figure says it all: volumes declared as Corbières trebled in ten years, rising from 800,000 hl in 1923 to more than 2 million in 1935.
Although popular locally, this extensive vision of the concept of appellation contrasted with the new requirements of the Decree-Law of 30 July 1935, which created France’s Appellations d'Origine Contrôlée. At a heated meeting in Paris on 6 December 1936, the leaders of the Corbières producers’ organisation refused to give in to the request by the National Committee for Appellations of Origin to redefine the appellation area and offer a more precise characterisation of the wines. In doing so, Corbières failed to jump on the AOC bandwagon.
Not all of Corbières though: around Tuchan and Fitou, winegrowers in nine localities decided to go it alone and asked for recognition as AOC in 1937. Recognition would come in two stages: before the war for dessert wines and in 1948 for dry wines in AOC Fitou. Conversely, for other parts of Corbières, it would take almost 50 years. But even when AOC Corbières was recognised in 1985, the issue of defining a higher level Corbières was left unresolved.

A new battle then ensued. In 1989, rather than setting stricter rules in restricted areas, the producers’ organisation simply suggested to Inao that the entire appellation be divided into eleven sub-regions. But in 1993, after two visits to the wine region, the Inao inquiry committee felt that there were not eleven different wine profiles. According to the board, only “products from the Boutenac area have an overall quality that clearly differentiates them from other areas”.
For Boutenac, the door was now open. Well, almost. Seven years later, another committee confirmed the existence of “a consistent vineyard site with a group of people united behind the same project, along with implementation of efficient production tools and typical, high-quality, terroir-driven wine”. More years would go by until an expert committee presented a draft demarcation in 2004.
In their report, the experts stated that they based their findings on criteria pertaining to the soils and sub-soils, “determined from the heart of the Boutenac wine area, located on Miocene molasse, with deep but non-fertile, stony, well-drained soil”.
In doing so - and this is so rare that it deserves a mention - they were merely confirming the boundaries defined by the producers themselves with the support of Jean-Claude Jacquinet, an agronomist with the Aude chamber of agriculture. “The idea was to select only those plots that could produce top-end wines”, recalls one winegrower. “This was perfectly clear in the minds of all the members of the association chaired by Gérard Bertrand, who had very clearly understood the importance of creating key drivers amongst the appellations of Languedoc”.
In actual fact, only a quarter of the areas classified as AOC Corbières in the region were included within the official boundaries of Corbières-Boutenac in 2005.
Ultimately, 2,668 ha were classified across ten localities. Today, barely a thousand are planted to vines and just 200 hectares are declared as AOC Corbières-Boutenac. In Boutenac, stringent standards and patience go hand in hand..