ROCKROSES AS AN EMBLEM

Since the 18th century, botanists have revelled in collecting plants on the sandstone soils of Boutenac woodlands, where rockroses grow in abundance. Their captivating spring flowers are one of the hallmarks of the area. 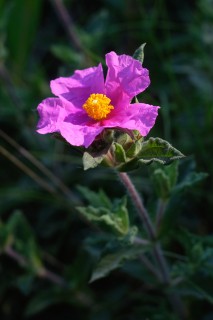 1. The wrinkle-leaved rockrose, with its vibrant pink flowers, grows in abundance across the Pinada.
On the left, an illustration by Enrico Cangini, from the SESA botanical group.

A simple adage by Achille Laffage started us wondering. “Wherever you find ‘mouchos’ growing, vines thrive”, said this rural economics professor from Carcassonne as the Aude wine industry was still reeling from the effects of the phylloxera crisis in 1895. In Occitan, ‘moucho’ means cistus…

For those who venture into the rolling hills of the Pinada, the ‘sacred mountain’ of Cru Boutenac, marvelling at the cistus in flower is one thing, making an unprompted connection with wine is another. Unless, that is, you have a penchant for poetry and allude to the taffeta of the petals or the penetrating fragrance of the Montpellier rockrose to try out some lyrical metaphors when wine tasting!

One thing is for sure though, and that is that cistus - apart from the grey-leaved cistus - prefers acidic soils. And that is precisely what makes the plant life specific to these soils unique, and a magnet for the hordes of botanists who come to the sandstone hills of Boutenac and Fontfroide.

In 1783, Pierre-André Pourret, a priest from Narbonne who was fond of the science that “commends knowledge”, had submitted plans for a General History of the Cistus to the Toulouse Academy of Science. The Revolution, which forced him into exile in Spain, prevented him from completing his pioneering work.

In 1861, Edouard Timbal-Lagrave published a ‘Study of some cistus of the Narbonne region’. A year later, the French Botanical Society would organise a special session in these parts. Subsequently, a few dozen scientists, including Jules-Emile Planchon, the future hero of the fight against phylloxera, ventured into ‘the ‘Coumbos caoudos or hot gorges, the homeland of the great cistus’, near Fontfroide Abbey. Unfortunately, “the cistus was turned into bundles and used to bake bricks”. All was not lost, though: the botanists stocked up on plants and, at the abbey, Alexandre Maugeret recounts how, “the wine of Narbonne is found to be superior to its reputation and the meal ends amidst the most cordial and genuine mirth”.

Twenty-six years would pass. On June 11, 1888, Father Léonce, a pharmacist from Fontfroide, welcomed a new delegation from the French Botanical Society, offering everyone “an armful of Cistus x nigricans and Cistus x corbariensis, two of the most sought-after and rare species”. This time, under the guidance of Charles Flahault, future creator of the Montpellier Botanical Institute, and Gaston Gautier, owner of the Craboules wine estate in Narbonne and a “tireless explorer of the Corbières”, they all went collecting plants in the Boutenac pine grove, above Les Ollieux.

After being decimated by phylloxera, the vineyards of Corbières were in a sorry state, but the cistus was lush. “Immediately after we arrived in the high forest of the maritime pine grove, the first Cistus populifolius (the poplar-leaved cistus) put on a display for us to admire”, says Gautier. The harvest that day amongst the hills, between Les Ollieux and Fontsainte, would be bountiful. The botanists’ enthusiasm triggered a change in attitude. The SESA (Aude Scientific Study Society) was created shortly afterwards. One of its members, Léonce Marty, published the Catalogue of Corbières Flora in 1912 based on Gautier's plant collection notebooks, with about thirty cistus and a long list of helianthemums, of the same family.

This would inspire Lucien Sémichon, director of the Narbonne winemaking centre. In 1937, he urged the SESA to work on a Monograph of the Corbières in order to “draw up the final statutes for the type or types of Corbières wines eligible for access to the new system for noble wines with a registered designation of origin”.

“In any given place”, explained the oenologist, “the flora always includes certain hallmark species followed by a suite of others, forming a ‘Site’ within the setting of the rocks that support or surround them. These sites are small homelands of plant combinations, whose hallmark species are in a way the frontrunners and insignia bearers...”

“Vines”, continued Lucien Sémichon, “are among the local flora that follow in the wake of these frontrunners. With charming versatility, they adapt wonderfully to the variations of the ‘sites’ and landscapes, and the wines they produce are reminiscent of them because they take on their most salient characters. Researching and understanding these different ‘sites’; looking at how vines sit within them; how they are shaped by them, and how their wines retain the imprint of the landscape where the grapes have ripened – “the insignia of the land” imprinted as local hallmarks - is not only an inquisitive and very appealing occupation, it is also a very insightful study”.

The agronomist Jean-Claude Jacquinet, who made a major contribution to the demarcation of Cru Boutenac in the 1980s and has fond memories of the beautiful pink flowers of the wrinkle-leaved rockrose, apparently shares Sémichon's idea that “the flora lends its appearance and its perfume to each growth”. For Jean-Claude Jacquinet, “the abundance of cistus, which is only found here, points to the uniqueness of a vineyard site strongly marked by the presence of sandstone, a fundamental driver of freshness in the growth’s wines”.

Pierre-André Pourret, born in Narbonne in 1754, pioneered the study of cistus. In exile in Spain after the Revolution, he was not able to finish his General History of the Cistus.

Jules-Emile Planchon (on the right), the hero of the fight against phylloxera, took part in the first session of the French Botanical Society in Narbonne in 1862. 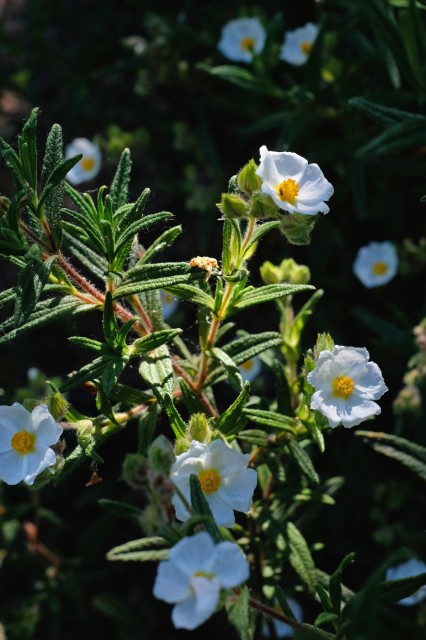 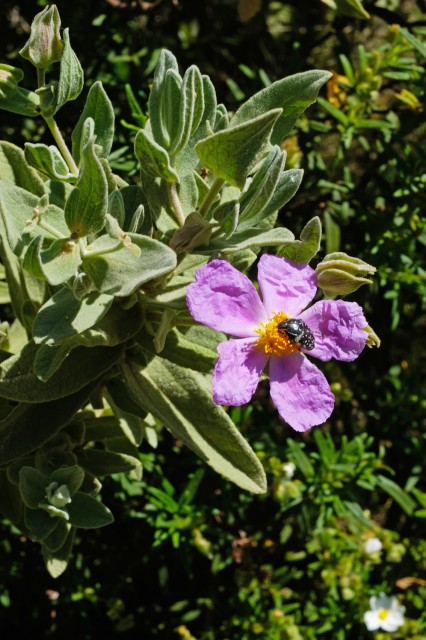 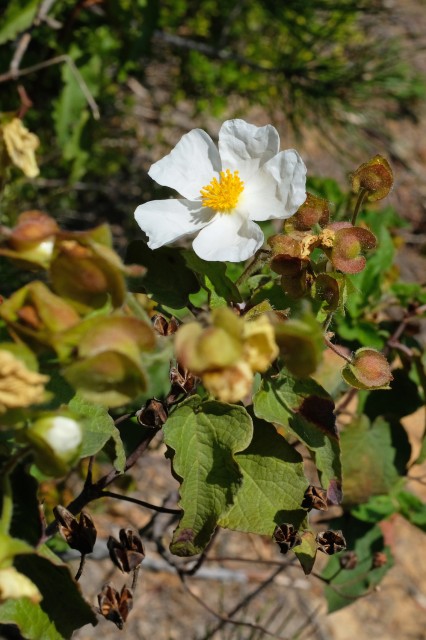 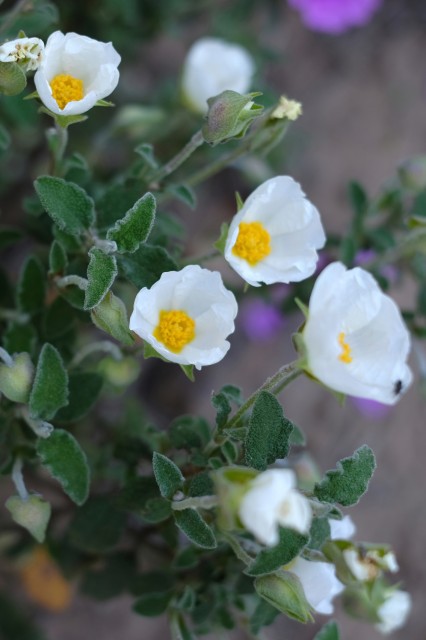 Although they may seem emblematic of the Pinada hill range in the spring, rockroses are not the only plants that thrive here, some on sandstone, others on limestone veins. In the remarkable Atlas of Aude Heritage Flora (Editions Biotope, 2016), the biodiversity of the Boutenac and Fontfroide hill ranges is considered average, with around eleven hundred species, but “incredibly rich” with 76 species classified as ZNIEFF (Natural zone of ecological interest, fauna and flora) and 59 heritage species.

Here are some specimens encountered during a short excursion with Jean-Marc and Fabienne Reulet as guides. 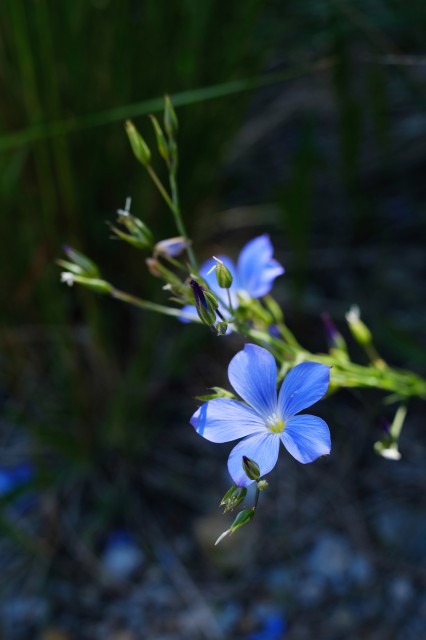 1. Flax from Narbonne, with its delicate azure blue flowers, is only found on the limestone soils of the hill range, around Roque Sestière for example. 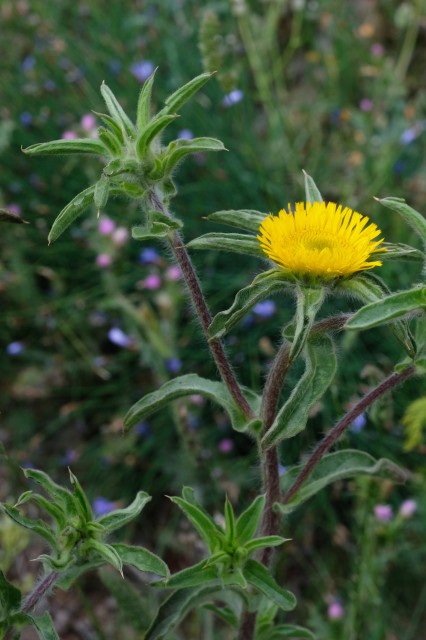 2. The common centaury, seen near the chapel of Saint-Siméon. 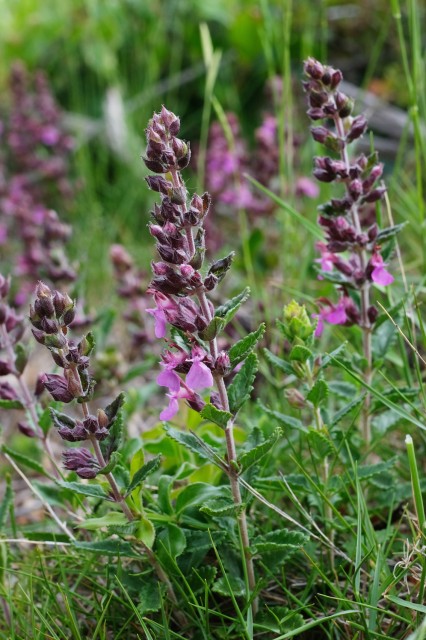 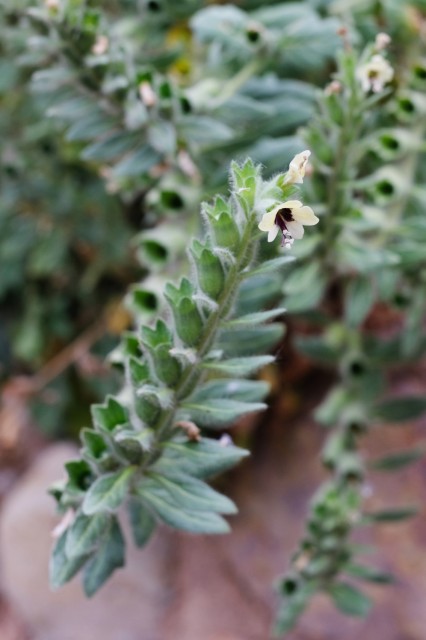 “It's a hallucinogenic plant. They say witches used to take it to enter into a trance”. 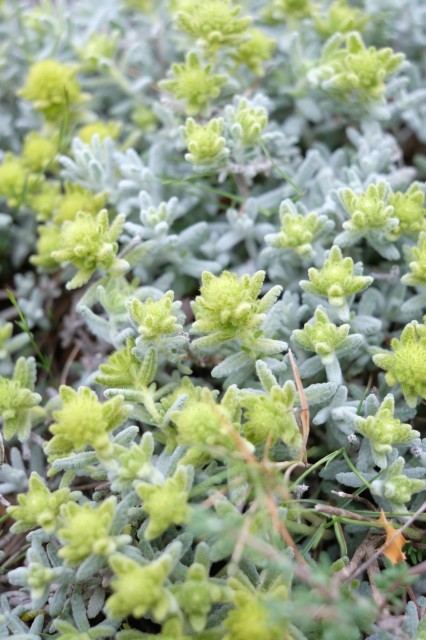 5. The felty germander. Defining feature: when crumpled between fingers, its leaves exude an astonishing smell of peppery sausage. The buds of the ribwort plantain, a few steps away, display a mushroom flavour; the Reulets use it to make omelettes.

6. The wall germander is toxic. As a diuretic, it was used to make slimming drugs, but is now banned.