2019 will be marked by three major projects involving three of the leading estates in Cru Boutenac. The redesigned winery at Villemajou will be officially opened this summer. The all-new Château des Ollieux complex near Fabrezan is in the building phase. And Caraguilhes is due to be equipped with an underground ageing cellar.

Whilst Château de l'Hospitalet in La Clape is Gérard Bertrand’s corporate headquarters, Château de Villemajou, in the heart of the Boutenac area, is still highly symbolic. Originally from Saint-André-de-Roquelongue, Georges Bertrand bought Villemajou in 1970. He made wines from its 35 hectares of vines there before passing away in 1987. Since taking over at the company’s helm, his son Gérard has constantly extended vineyard acreage around Boutenac, increasing it to its present-day 185 hectares, spread over the pebble-strewn hillocks of Gasparets - including the iconic La Forge vineyard - Domaine Aigues-Vives, acquired in 2011, and vineyards near Château des Ollieux. The strategic plan prioritises the vineyards. “The idea was to secure complete control over the vineyards in order to move them up the quality ladder, right through to the top”, explains Richard Planas, director of Gérard Bertrand estates. “We are aiming for excellence and premiumisation. Under the guidance of three area managers, we converted all the vineyards over to biodynamic farming in three stages, starting with Aigues-Vives in 2015. We have also taken care to maximise genetic diversity, especially in plots of old-vine Carignan”. The policy underscores the company’s strong commitment to the appellation, whose producer’s organisation was first chaired by Gérard Bertrand. “We account for half of AOC Corbières-Boutenac volumes, and for the past two years, our three labels - Château Villemajou, Villemajou Grand Vin and La Forge - have been selected among the appellation’s ten best wines. That is a great source of satisfaction for us”, stressed Richard Planas. 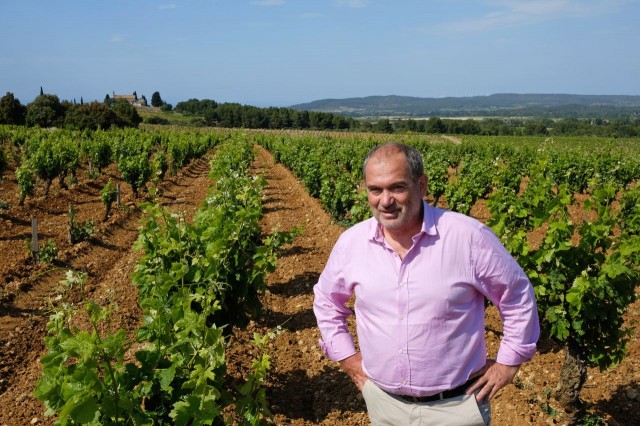 But although, as he says, “technology takes a back seat to terroir in our opinion”, the time had come to modernise the winemaking facilities at Villemajou. In that they are not alone.

“Our corporate blueprint focuses on showing our important clients around our vineyards and cellars as the best way to showcase our wines. Restoration programmes for all our wineries aim to promote comfortable working conditions, maximise wine quality and create the kind of hospitality that leaves a lasting impression on everyone. L’Hospitalet has made this crystal clear to us”.

At Villemajou, the project proceeded apace, despite the need to acquire four adjoining buildings to completely redesign the winery based on Eric Martin's large L-shaped plan.

The new structure has a clear layout, with a first, semi-underground building, added to the original cellar as an extension, all of which is clad with a new roof, complete with beautiful wooden rafters replicating the original roof. This long building will house the red wine cellar - a mix of concrete and stainless steel tanks - and the barrel cellar, both separated by a huge glass partition so as not to lose any of the spectacular perspective afforded by the building. The whites will be made separately, in a smaller, perpendicular building, with a barrel cellar equipped with the Oxo storage system, a first for the company. Ultimately, the spirit of the place, overlooking the stream of Villemajou, has been preserved. The redesigned winery should blend in with the landscape even better as the outside render will be covered with a coloured whitewash using ground local pebbles! The official opening is scheduled for the 16th Jazz at Hospitalet festival, at the end of July. A few days before the harvest....

After buying a small estate from François de Lignéris in 2012 (Champ des Murailles), Pierre Bories was able to make do with a small winery in the village of Fabrezan. But when he acquired his sisters' vines in 2018 (40 ha in AOC Corbières and 20 in AOC Corbières-Boutenac), the owner of Château des Ollieux knew that he would have to up the tempo. Rather than extend the winery at Les Ollieux, he chose to build a complex outside Fabrezan complete with red winemaking facilities and maturation cellars, a bottling line, offices and a vast storage area. Completion is due in December. His decision was not made lightly. “As part of what I consider to be the logic of a growth, I am developing a range of single-vineyard wines. The plan is therefore to divide up the two properties. The vineyard sites in Fabrezan are different to those of Les Ollieux in Montséret: the soils, aspects and rainfall differ, so the Fabrezan reds will be fermented and matured in the new winery. The diversity of locations gives Cru Boutenac its rich resources, its micro-climates lend themselves to different styles of wine; it would not make sense to blend Carignan from Fabrezan and Les Ollieux”.

For convenience, however, the bottling line and extensive, atmosphere-controlled storage space with a capacity of one million bottles will now be centralised in the new facilities.

Beautifully located, near Fabrezan on the road to Fontcouverte, the future complex of Pierre Bories will be operational next December

“We produce 900,000 bottles across the estate, and additional 400,000 bottles for the negociant business. Also, for some labels such as Alta Sia, we have three vintages in stock. So basically, we need lots of room!” The project has not sacrificed aesthetics. The remarkable setting, on a hillock commanding panoramic views over the northern side of the Pinada, the village of Fabrezan and beautiful Notre-Dame de Consolation chapel with the Pyrenees in the backdrop, has been fully factored into the build. Eric Martin's semi-underground, minimalist building with its green roof terrace in the central part and large kitchen garden to the side, will blend into the landscape.

Nature for a guide

However ambitious, the project is only the first component of the “rocket”.

In the immediate aftermath, in 2020, the winery at Les Ollieux will be completely transformed. “We are going to recover some space and set up a new state-of-the-art winery with double-skin stainless steel tanks. In 2018, 2,000 hectolitres were already fermented without sulphur, using native ferments; ultimately, all the wines will be organic and natural. We need a nitrogen generator, a top-level cooling unit. As it is still presumptuous to sell very expensive wines in Languedoc, this level of investment is a challenge for small estates, even those that produce top quality wines. At Les Ollieux, we are continuing to make artisanal wines in 100-hectolitre tanks, but with capital reserves. With 160 hectares in total, we have reached the critical size that allows us to make these investments”.

Since he took over management of Château de Caraguilhes in 2008, Etienne Besancenot has had to juggle with space for oak-aged wines. “The barrels are placed under the press, in alcoves and passageways. Our policy is to transfer the wine into casks early, which fortunately allows us to free up some space just before the harvest”, he explains. “This is the way it has worked for the last ten years, but it's not always very practical!” Etienne and Pierre Gabison, the French, Hong-Kong-based businessman who has owned the estate since 2005, agreed to prioritise the vineyards. With 95 hectares under vine, there was certainly no shortage of work to be done. “We quickly sought to comply with the requirements of AOC Corbières Boutenac regulations. The 70 hectares eligible for the appellation were a long way off complying with varietal range rules so we had to pull out all the stops to bring the vineyard up to speed. On one occasion, we planted 15 hectares in one year!” The time has come to focus on the winery. “Now we can have some fun! On a more serious note, to progress technically, the time had come to improve the practical, but also technical, conditions for maturation”. The next stage is now in the pipeline, much to the satisfaction of cellar master Emmanuelle Tant.

The process was thought through in conjunction with Narbonne architects Romain Passelac and François Roques.

On the sketches of Romain Passelac and François Roques, the minimalist entrance of the breeding cellar and the pyramid-shaped central space where will be housed the barrels.

It was decided that the maturation cellar would be set into the high wooded bank located at the back of the chateau. “We will be at one with the environment”, explains Etienne Besancenot. “Not only will the cellar be completely underground but, as an added bonus, this is a very cool place with a spring which will enable us to use natural air conditioning, in line with the organic principles we adhere to. We will even try to preserve the pretty pond at the foot of the woodland and, once the cellar has been buried, we will replant a small vineyard on stakes with trees further up the hill...”

In addition to functionality, particular attention has been paid to the aesthetics of the future building. Plans to build a high semi-spherical vault were too expensive and were shelved. Ultimately, the architects designed a concrete pyramid structure for the central area, with a thin rectangular skylight at the top. This 150 m2 space will house barrels intended for ageing the chateau's red wines, including two of its three AOC Corbières-Boutenac labels, Solus and Trou de l'Ermite. “Alcoholic fermentation for two-thirds of Solus is finished off in barrels in the liquid phase, which allows the oak tannins to be subsumed into the wine more quickly and to complete the first phase of ageing before winter”. Two, 30 m2 side rooms have been designed, one for white wines, the other for storage. Some space has also been set aside for egg-shaped tanks and amphorae for Echappée Belle, the third Boutenac label. Ground works are due to start in the summer, and building work is scheduled for early 2020. 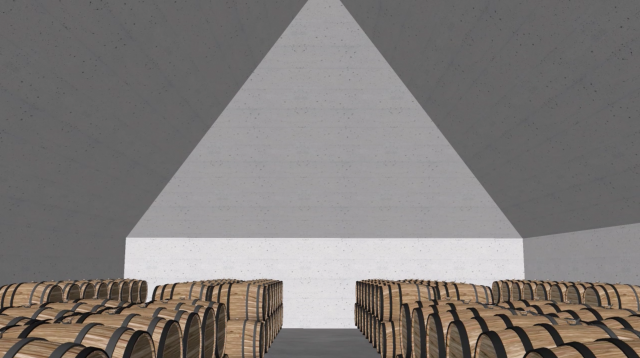